So here it comes: 2012. For those of that have been teaching for a

while the new year brings lots of questions about what the new year will bring. So much has changed since I started teaching 28 years ago. When I started, Michael Jackson was the reining King of Pop and computers weren’t being widely used. Sony Walkmen blasted Thriller from cassette tapes into students‘ ears during trips. Boom boxes were big… but discouraged by school authorities. 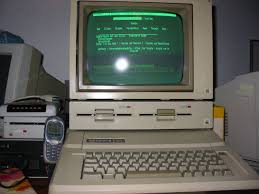 I remember using my Apple II in the classroom to do grades and store worksheets. About half of the teachers at school resisted using computers, as they wanted to continue teaching and grading as they always had. I was always interested in new technology. I spent $2500 on a new Apple IIGS after

teaching for a few years. It was supposed to be the computer that would be a bridge between Macs and IBMs. It was a terrible waste of money but it did allow me to be one of the first people I knew to get online and talk to other teachers around the country on the precursor to AOL called Applelink (as a charter member of this online community, I received a complimentary a t-shirt).

A few years later, I was the first in school to get a video projector that I could hook up to a VCR layer and a computer. I started using PowerPoint and saving everything to our school server. A few times I recorded lectures with PowerPoint onto a videocassette that my substitute could play. I was one of the first to allow access to student grades online at the school, and I did a little workshop to show other teachers how they too could do their grades online. Most teachers thought what I did was too cumbersome and continued doing their grades on calculators.
So here comes 2012. One of the biggest discipline problem now is students using their cellphones in class (I confiscate them until the end of the day). What new ideas will be coming along this calendar year? I know I’m not the most up-to-date teacher around but I do have my lesson plans online and the student grades are posted securely online. Now if I could just get my students to use those smart phones of theirs to check my website when they miss a day of school instead of coming in the next day and asking what they missed.